Nothing says ‘Merica more than a gorgeous woman dressed in leather going through an action-packed teaser, right? Well that’s what Weather Tech’s ad for Super Bowl LI has in store for viewers this year. Their spot has a patriotic edge that resonates with their “Made in America” branding. Conversation surrounding @WeatherTech has been increasingly growing since January 31st with their release of their Super Bowl teaser. 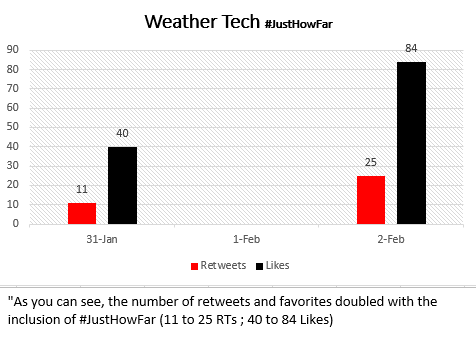 After their initial teaser release, they began using #JustHowFar as an identifier for their campaign this year. As you can see below, the number of retweets and favorites increased with the inclusion of this hashtag. 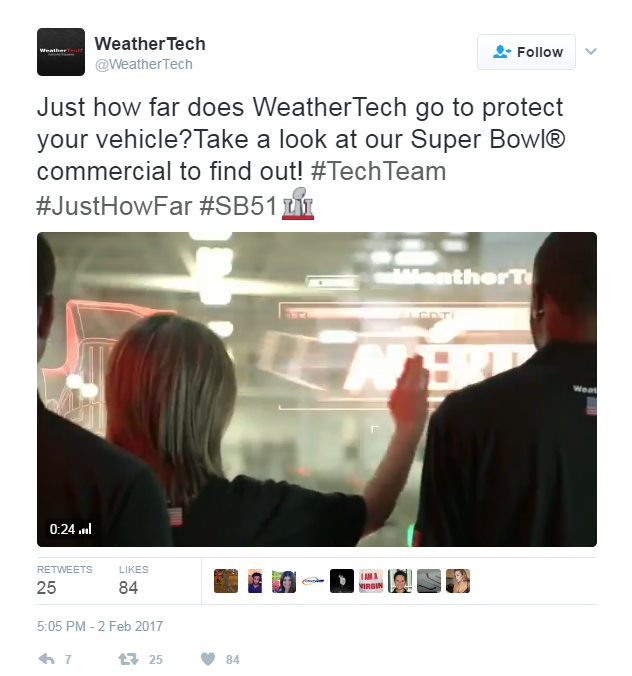 With it being a political year, you would expect the concepting of this ad to be in relation to President Trump’s platform of American-made products and American jobs, but according to David MacNeil, the CEO of MacNeil Automotive Products, that’s not the case. In a chicagobusiness.com article, MacNeil was quoted to say, “We’ve been on a steady course of supporting American jobs, American factories, American business and of course the American workers for many years before there was anything political about it,” he said. “We’re continuing on that exact same path we’ve always been on because that’s what we believe in.”

@WeatherTech has had a Super Bowl ad for the past 4 years due to its high success rate for target consumers (WeatherTech.com traffic increased 756% from 2015 to 2016 after their subsequent Super Bowl ad). After tonight’s game, we will see if @WeatherTech branding through their Super Bowl spot will receive the anticipated reaction they are expecting.

Which Beer Brand Will Gain the Best Attention?

Which Beer Brand Will Gain the Best Attention?