PETA is the largest animal rights organization in the world. Alongside its 6.5 million members, it actively works towards the promotion of ethical animal treatment. PETA’s strong social media presence is evident through their active twitter profile in which they post and engage with users about the unfair treatment of animals everywhere. This blog post discusses the effectiveness of posting videos in engaging twitter users in comparison to text only, still images, and other media types. Engagement per media type refers to the nature of content posted on Twitter and how it affects levels of engagement among followers, on average. While analyzing PETA’s tweets for engagement, results show videos garner the highest levels of engagement with animal related videos being most effective. 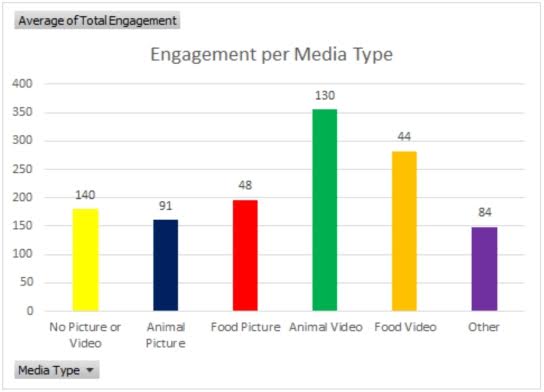 Engagement is higher among tweets with animal videos because animal videos lead to an emotional reaction from the user. The short informational videos are engaging, interesting, and sometimes controversial. Because of this, the user is more likely to ‘like’ or ‘retweet’ the post to their followers. In order to attract more engagement, PETA focuses on the emotions of their viewers. They tweet graphic videos to expose industries that torture animals, so the viewer will be grossed out and turned off of that industry or associated brand. These videos might feature something like animals being bused in a fur coat factory. They also post happy-ending videos of animals who were rescued or given a second chance, so the viewer will feel happy and have a desire to help all mistreated animals.

One example of PETA using scare tactics is this informational video about the dangers of puppy mills to show the abuse that comes with this type of industry.

Buying dogs from breeders or pet stores just because you want a specific "breed" contributes to animal homelessness and horrors like THIS. Plus, an estimated 30% of dogs in shelters are purebreds! #AdoptDontBuy pic.twitter.com/mPk42ztSrZ

However, PETA also tries to invoke joy from their users, by using videos with cute animals such as in this tweet.

Who wouldn't love to curl up with their favorite friend on #NationalNappingDay? 😴💕 [via @sigualdad] pic.twitter.com/3CfybzXSTI

This emotional strategy is evident in a sentiment analysis of PETA’s twitter account which reveals most of the distinguishable emotion found in their tweets is either joy or disgust. It is clear that PETA does best when their audience is emotionally charged (either in a joyful or angry way) via a video stimulus, so by focusing on producing these kinds of tweets they are able to extend their reach. 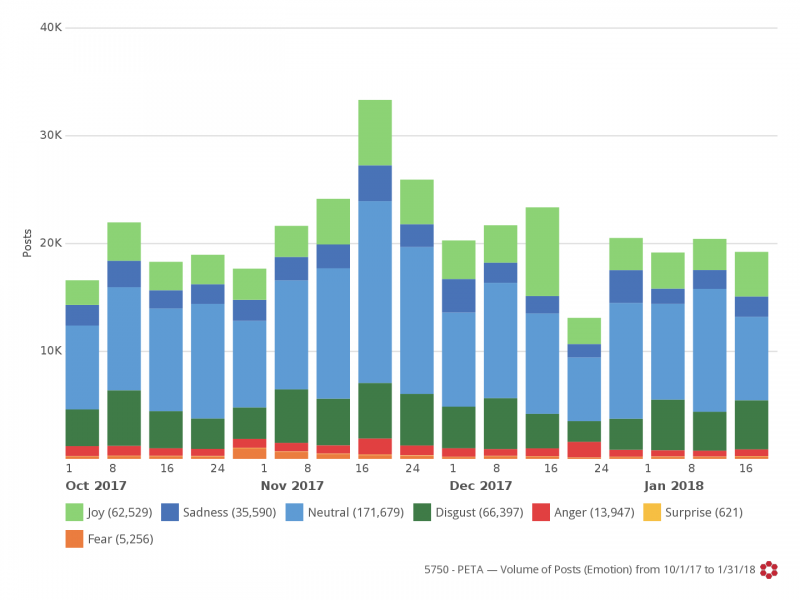 The number of tweets of this nature is a good indication that PETA has acknowledged the success of this content type, and they are posting more animal videos. If PETA continues to follow this trend, their tweets with animal videos will continue to attract engagement.