Budweiser’s “Born the Hard Way” Super Bowl ad rallies around the story of its German immigrant founder, Adolphus Busch, and his journey for the American dream. While Budweiser VP Ricardo Marques says there is “no correlation with anything else that’s happening in the country,” those from both sides of the twitter-sphere, left and right, have seen Budweiser’s immigrant story as the beer brand taking a political stance on the heated topic of immigration and the actions of President Trump.

From the right, the conversation on twitter about Budweiser has centered a Breitbart News article shared by an avid Trump supporter @JayS2629 claiming, as Conservative media analyst Mark Dice (@MarkDice) tweeted, that this ad is nothing but “Pro-Immigration Propaganda.” There has even been a small movement on twitter to #BoycottBudweiser as those on the right have taken this as a jab on President Trump and his travel ban. The left, however, is applauding “Born the Hard Way” as a championing of immigration saying that this ad is “trolling” the President. 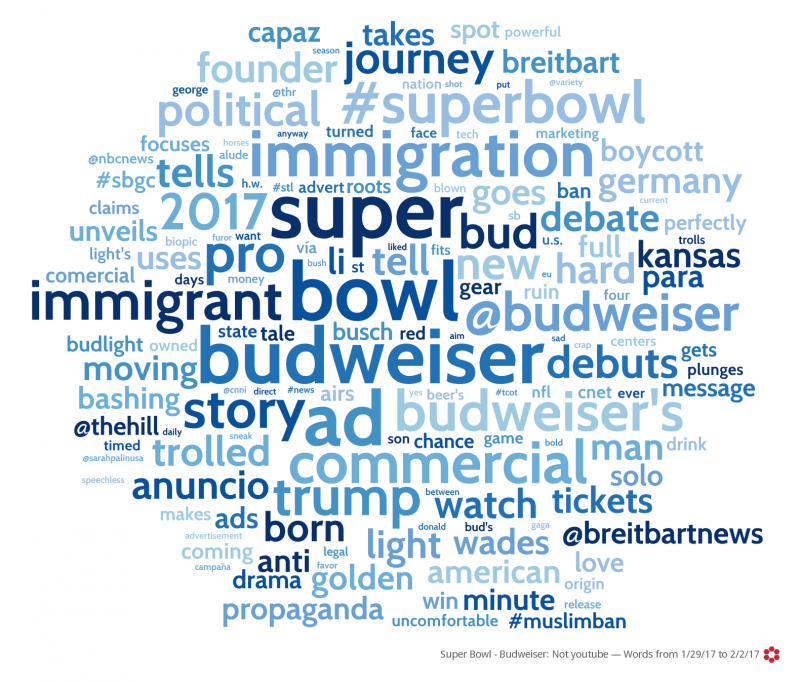 Budweiser continues to claim its ad is nothing but a riveting creation story and not a political commentary but nonetheless come Super Bowl Sunday we will see if Budweiser decides to embrace the political gravity of its ad or continue saying it is the victim of poor timing.

Waiting for the Superbowl (ads)? See how they are doing on Twitter!

Waiting for the Superbowl (ads)? See how they are doing on Twitter!