Wix and GoDaddy are both returning to the Super Bowl this year to promote their services through compelling and shareable commercials. Although the competing web-hosting companies both released their ads prior to the big game, the two are taking very different digital approaches to engage with online audiences. Through celebrity appearances and online promotional contests, Wix has maintained a more consistent presence in social media conversation.

GoDaddy’s ad personifies the Internet while featuring various “easter eggs” of viral classics, such as sneezing pandas, roomba cats, and identical dresses in blue/black and white/gold. While the idea is clever and highly relevant, the ad failed to stimulate constant conversation. When teasers and the official ad were released on January 25 and February 1, respectively, social media conversation spiked. Otherwise, the conversation has been generally slow.

Wix’s ad campaign stars Jason Statham and Gal Gadot in a series of mini films, in which they bring chaos and destruction to the protagonist Felix’s small businesses. After being the first company to announce its creative on Facebook Live, Wix is using social media to continue conversation about the ad with the #DisruptiveWorld. But what has contributed most to Wix’s pregame success is the company’s social media contests, in which users can win prizes by joining the conversation. Conversation spiked on January 31 when Wix announced that viewers could win smartphones by simply tweeting, and it has been relatively active since. 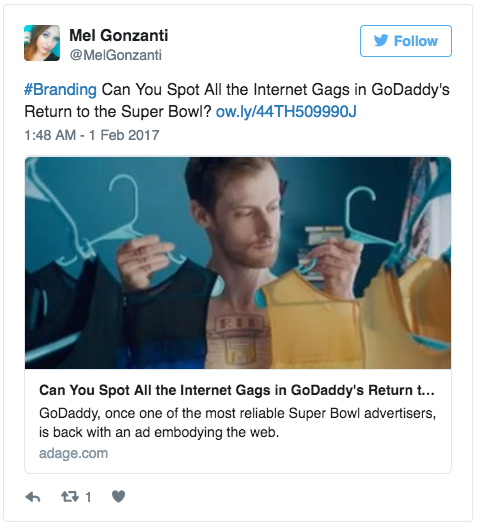 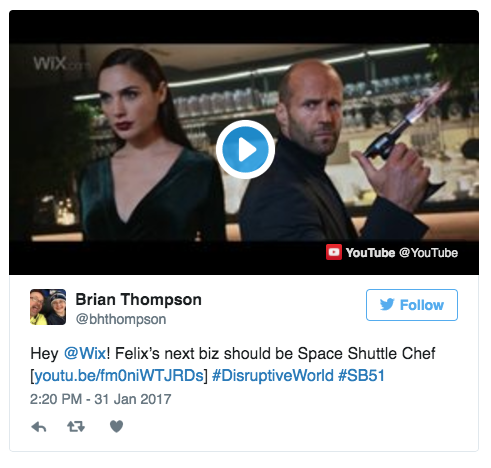 Honda and Kia use starpower to attract viewers

Honda and Kia use starpower to attract viewers