In the days before the Super Bowl, automakers Honda and Kia both gained attention from pre-releasing their commercials. By featuring big name celebrities in clever ads, both companies successfully sparked conversation about their brands. Honda’s “Power of Dreams” depicted celebrity yearbook photos that were well-liked by audiences, leading to more positive sentiment about Honda than Kia’s environmentally-themed ad starring Melissa McCarthy.

Although both companies successfully captured audiences attention before the game, neither company managed to take the lead. While the Honda commercial had more positive sentiment early on, positive sentiment is at an equal 52 percent in conversations about Honda and Kia during the game. Conversation spiked after each brand’s ad aired, however the Kia conversation remained steady for a bit longer. On the other hand, negative sentiment about Kia’s ad is higher due to its relation to politics.

In the end, Kia and Honda released funny, inspiring Super Bowl commercials featuring some of our favorite celebrities. Although they are entertaining, only time will tell whether they’ll fade into the category of unmemorable car commercials. 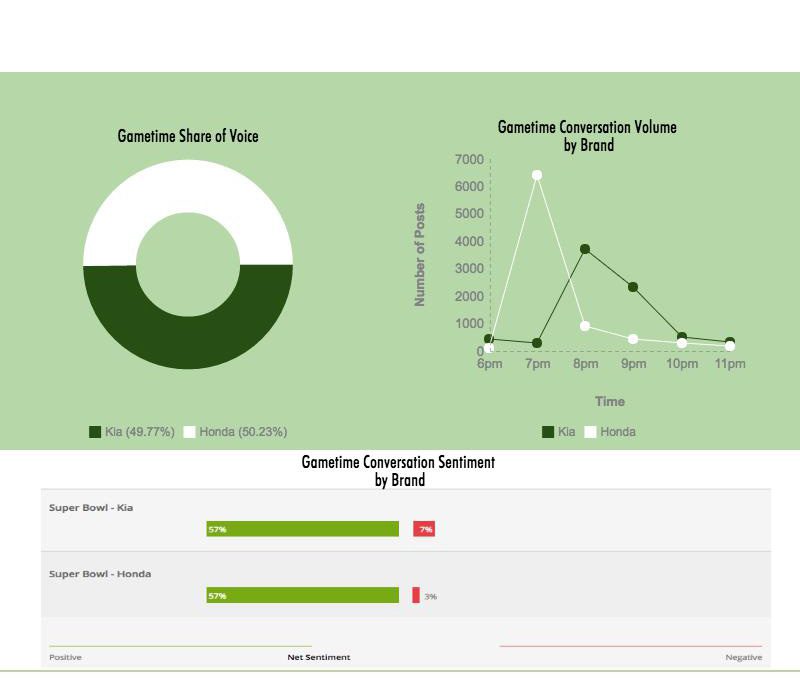 Battle of the Mars Brands: Gametime

Battle of the Mars Brands: Gametime