Consistently being one of the Super Bowl’s biggest advertisers, beer giant Anheuser-Busch purchased ad slots this year to promote three of its brands: Budweiser, Bud Light, and Busch. Although Anheuser-Busch’s commercials are typically some of the most well-received ads featured in the big game, this year Budweiser’s somewhat controversial message is overshadowing the other brands.

Although the brand has been around for over 60 years, this is the first ever Super Bowl appearance for Busch Beer. The commercial features a man relaxing and enjoying the serenity of nature as he cracks open a can of Busch beer, which then makes a long-lasting fizzing sound in contrast. The simple, enjoyable ad sparked conversation when it was released on February 1, but has since lost attention.

Instead, the majority of social media conversation is centered around Budweiser’s commercial, which tells the story of founder Adolphus Busch’s immigration to America from Germany. Although the company claims its message is about “not backing down from dreams and beliefs” and the pursuit of the American dream, many viewers see it as a well-timed political statement on immigration. The ad sparked an incredibly high volume of conversation that increasing still, with over 85,000 posts and almost 100 percent Share of Voice compared to Busch Beer. The sentiment of conversation surrounding both Busch and Budweiser is generally positive, however Budweiser’s conversation has a larger percentage of negative sentiment. This is the result of users tweeting with #BoycottBudweiser in opposition to the commercial. 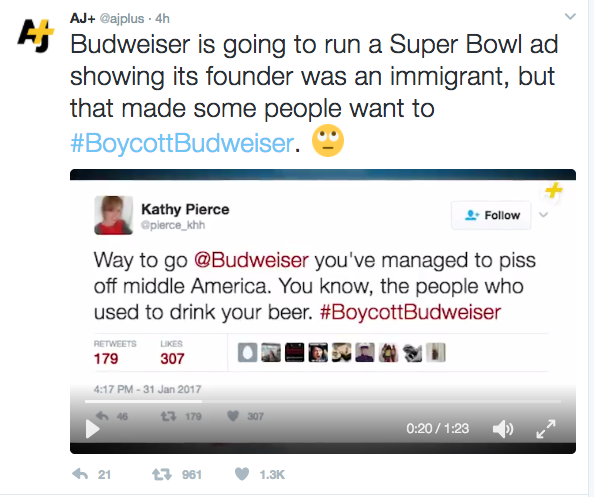