Avocados From Mexico – the world’s largest exporter of delicious avocados – has chosen to remain light-hearted during the week leading up to Super Bowl LI. Contrary to other ads that show a heavy influence of the political situation at hand – e.g. Budweiser’s “Born The Hard Way” – Avocados From Mexico has decided to steer clear, possibly keying in on the recent downward spiral of US-Mexico relations.

According to an article from CNBC, Mexico is expected to account for 80% of avocado supply this year (NAFTA allowed for the import of Mexican avocados into the U.S. beginning in the 1990s which has led to their dominance in the market). With President Trump considering the possible renegotiation of NAFTA and introducing a steep 20% import tax on Mexico, there is a strong likelihood that this delectable treat will not be as readily available (or more expensive) in U.S. markets.

Alvaro Luque, the president of Avocados from Mexico, released a statement that expressed the brand’s interest in “staying away from the political stuff,” which is an interesting concept in today’s super-politicized era. Instead, the brand shows high levels humor in two short teasers – one of a secret organization, and another of @RealJonLovitzof Twitter engagement, mainly in the form of retweets of their hashtags #AvoSecrets (with an aggregate usage of 33,000+ times) and #AvoSweepstakes (an aggregate usage of 20,000+).

The highest retweeted content from @AvocadosFromMexico directs users back to the central website of the campaign – avocadosfrommexico.com/big-game – where users can access the brand’s “mysterious phone” that has Top Secret avocado information. 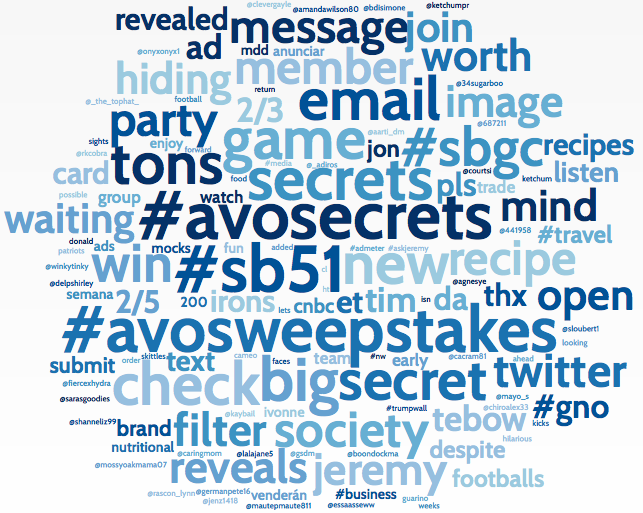 We will see after the airing of Avocados From Mexico’s commercial if the decision to remain separated from the political conversation was the right branding move or if the light-hearted nature of the ad resonates with avocado consumers who just want to forget about what’s going on and enjoy chips and guac.