The Twittersphere took well to @WeatherTech’s portrayal of women in their Super Bowl LI advertisement. While the overall engagement reached only a total of 338 posts, over 20% of those posts showed positive reaction to the theme of Gender Equity that the brand was portraying. This shows a sharp differentiation from brands who discussed other, much more pressing political issues in their ads (e.g. immigration), which could explain for the low @WeatherTech engagement later throughout the night. 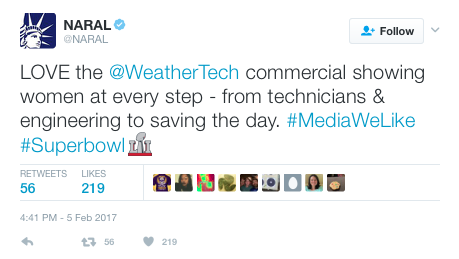 However, despite initial positive response to @WeatherTech’s ad, they did not remain prevalent in the overall Super Bowl conversation. This leads me to the hypothesis that while they audience approved of the gender equity component of @WeatherTech’s concept – they were not able to capture and maintain the public’s attention, especially when competing with other brands who had more memorable content.

Once we collect data related to @WeatherTech for the days immediately following the Super Bowl, we will be able to determine whether the brand

Super Bowl 2017: Did the Snickers Live Stream Commercial Live Up to the Hype?

Super Bowl 2017: Did the Snickers Live Stream Commercial Live Up to the Hype?