Anticipation for the first-ever live stream commercial during Super Bowl 51 was on the rise with the help of celebrities like Betty White posting teasers on personal Twitter accounts, such as “#SNICKERSLive will be unlike anything I’ve ever seen in my 95 years! Make sure you’re watching during the 3rd quarter! #SB51 #sponsored.” The commercial aired during the beginning of the third quarter and featured the Star Wars: The Force Awakens star, Adam Driver, destroying the live-stream in an orchestrated skit. The tag line that followed stated, “Never shoot a live super bowl commercial when you are hungry.”

The live-stream created a spike in the volume of posts during the hour from 7 p.m. to 9 p.m. with an aggregate of 1,320 posts in that hour. Looking at all of the posts sent from 6p.m. to midnight on Feb. 5, the hashtag #SNICKERSLive dominated with 2,329 posts — 49% of the total posts.

Ad Age soon after questioned whether the commercial was able to live up to expectation, “What do you think, was it necessary for @SNICKERS to do that #SuperBowl ad live?” Spiked conversation and engagement on Twitter paired with positive sentiment may be the answer. 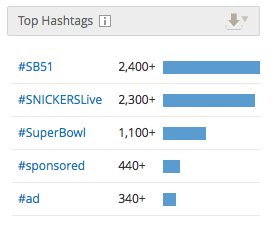