The Malala Fund is an international organization advocating for girls by investing in their education, health and future. Inspired and instituted by Malala Yousafzai, this movement is dedicated to letting girls’ voices be heard through telling their stories. The Malala Fund joined Twitter in 2013. We analyzed 216 tweets from July 1, 2017 to September 17, 2017. Analysis of data from Crimson Hexagon reveals a relationship between the type of media and the average engagement. 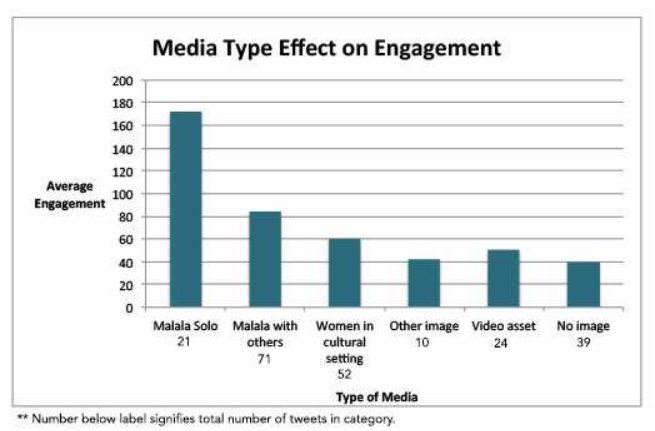 The Media Type Effect on Engagement graph details the average engagement of each category: Malala solo, Malala with others, etc. The number beneath the category title is the number of tweets in each category out of 217.

After finding this insight, we audited the account to see specific tweet examples of our findings. Tweets that include images of Malala alone, like this, perform the best. This image, along with the tweet copy, is an example of a “Malala update,” which contains copy or links that relate to Malala’s current actions or location. Malala updates are what most singular images of Malala can be categorized as.