It is telling to note the impact and importance of our greatest spike in conversation for the Human Rights Watch that occurred on April 11, 2017, with a total of 34,676 posts. This spike was caused by the discovery of concentration camps detaining 100 gay men were discovered in Chechnya, Russia. The social media activity centered around this violation of human rights took place across Twitter, blogs and resided mainly on Tumblr. This highlights the value of the Human Rights Watch being active in human rights conversations on multiple platforms, while specifically increasing the coverage of LGBTQ+ issues on Tumblr.

This infographic is representative of our entire spike analysis ranging from October 1, 2016 to June 30, 2017. The daily organization of these spikes clearly shows the largest spike was on April 11, 2017.

The Human Rights Watch has been inactive on Tumblr since November 2016. Based on the Tumblr content causing the most extreme spike in conversation that the Human Rights Watch has had, it is clear that there is major opportunity to connect with this audience. This engagement would be most effectively accomplished through the creation of more content on Tumblr revolving around LGBTQ+ issues and through engaging with Tumblr users through reblogs and likes. 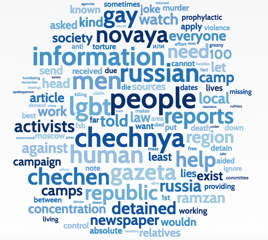 This image is a word cloud taken from the April 11, 2017 spike. The size and individual words are representative of the conversation metric and content.