Our social media listening using Crimson Hexagon focused on the conversation happening on Twitter around the iPhone X from August 12, 2017, when rumors were prevalent prior to the keynote on September 12, until November 6, 2017, three days after the release of the iPhone X on November 3, 2017.

Between August 12 and November 6, 6,118,221 tweets that included our keywords and hashtags were posted. Out of these tweets, 4,611,673 were considered relevant. That means 25 percent of the tweets were sorted into our “irrelevant” or “off-topic” category. 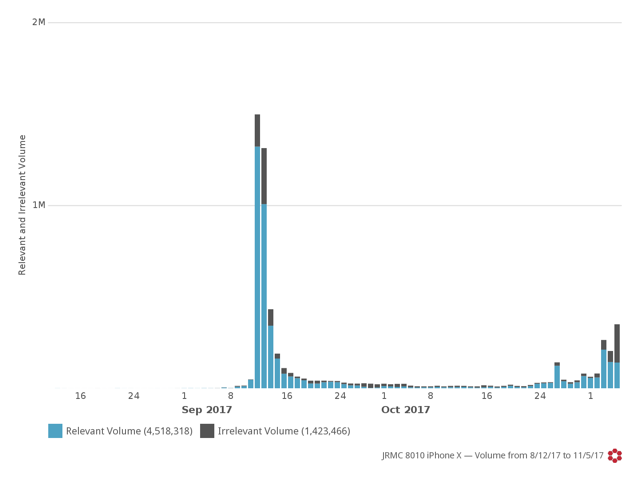 There were two notable spikes in volume. The first spike, seen on September 12, occurred because of the Apple Keynote and original announcement of the iPhone X. Tweets of all categories trailed off until later in October, closer to the iPhone X release date. It is interesting to see a notable higher volume of tweets with the announcement versus the actual release of the phone.

Most surprising was the success of the joke category. Despite Crimson Hexagon’s reputation as an industry-leading sentiment detective, our team was skeptical that any algorithm could recognize humor found on Twitter.

Our team was puzzled by a seemingly obvious limitation. Crimson Hexagon did not distinguish retweets, even verbatim ones without addition, from original tweets.  This led to a few sampled tweets having disproportionate representation in analytical views such as Word Cloud. While retweets are indeed tweets, it seems odd to count them among originals, since delineation is already offered through the ubiquitous “RT” designation.