The #MeToo Movement has grown into a global phenomenon to create dialogue and solidarity about sexual assault. The movement created a voice for the millions of women and men who have faced this at some point in their lives and with it has brought upon some justice in bringing down various powerful abusers. Though most of the conversation is created by English speaking users, there exists a trickle-down effect into the Spanish-speaking demographic, which follows the general trend of tweets regarding major events relating to the hashtag. Within the Spanish speaking demographic certain events have also sparked more conversation. 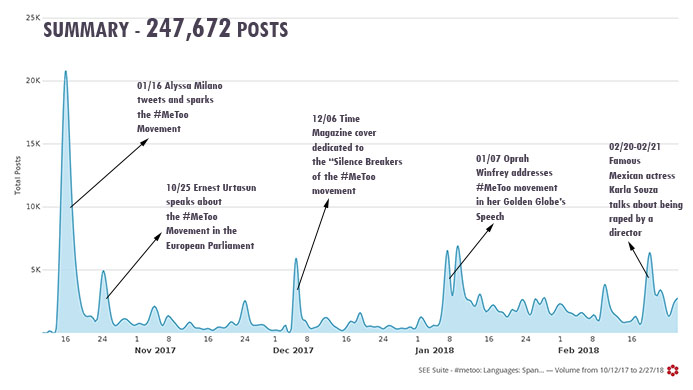 This graph depicts many of the similarities seen within the English-speaking users of the #MeToo movement. A huge initial spike on January 16th, 2017, a day after Alyssa Milano sparks the movement with her tweet. A significant spike on December 6th, 2017, created by Time Magazine dedicating its cover of the year to the women that broke the silence about sexual assault and another created on January 8th, 2018 after Oprah Winfrey addresses the movement in her speech at the Golden Globes.

Yet there exist two notable different spikes created by Spanish speaking public figures. The first is caused by Ernest Urtasun, a Spanish politician, speaking about the movement in the European parliament and saying that it shouldn’t just be five men having a debate about sexual harassment and that they have the responsibility to also change. The tweet was posted on October 25th, 2017 and sparked 4,400 total posts about the #MeToo movement in Spanish.

The second notable spike in comparison to posts made in English occurs on February 20th, 2018 and is sparked by Famous Mexican Actress, Karla Souza. Known for her roles in famous series like How to Get Away with murder, the actress talks in an interview in Spanish with CNN about her experienced being raped by a director. This event sparks 3,881 total posts on the day of the interview and peaks at 6,664 total posts the next day February 21st, 2018.

Two Out of Five Isn’t too Bad

Two Out of Five Isn’t too Bad