The #MeToo movement had gained an almost pervasive fame in American society as women have been using their social media platforms and this hashtag to stand up against sexual assault. However, if you were to ask someone six months ago about the #MeToo hashtag, no one would have any clue what you were talking about. What brought about this movement and who is keeping it from falling out of trend?

The first big wave of #MeToo tweets was started by actress and activist Alyssa Milano (@Alyssa_Milano) when she tweeted on October 15, 2017 encouraging others to respond to her tweet with “me too” if they had been sexually harassed or assaulted to demonstrate the magnitude of the issue. On this day 180,700 users tweeted the #MeToo hashtag, and just the next day the hashtag peaked with 741,563 tweets in one day.

If you’ve been sexually harassed or assaulted write ‘me too’ as a reply to this tweet. pic.twitter.com/k2oeCiUf9n

No other day matched the peak after Alyssa’s post, but many people continued to use the hashtag and stand up against celebrities such as Kevin Spacey and Roy Moore who many women and men claimed were sexual offenders. However, another large spike in posts did not come until December 6, 2017 when Time Magazine released their ‘Person of the Year’ cover which featured some of the women who shared their stories. On the 6th, there were a total of 299,734 tweets sent with the #MeTtoo hashtag used. Later in December, two smaller spikes occurred following celebrity chef Mario Batali’s resignation on December 11, 2017.

There has been one large spike in tweets since the new year, and this trend followed Oprah Winfrey’s powerful speech at the Golden Globe Awards on January 7, 2018. In her speech Oprah discussed how the problem transcends not only the entertainment industry but many other industries as well. On the 7th, 125,749 tweets included the #MeToo hashtag, and the trend continued on the 8th with 170,087 sent posts. Since Oprah’s speech, there has been a 56% decrease in post volume surrounding the #MeToo conversation, indicating a definite decline in the hashtag’s popularity. But as these spikes have demonstrated, all it takes is one celebrity endorsement or accusation to revamp the movement. 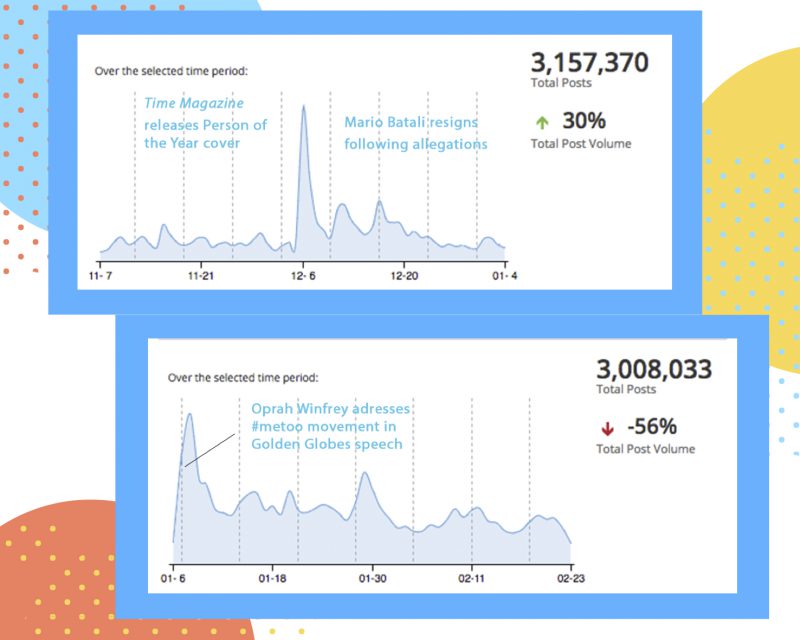