Best Friends Animal Society is a non-profit organization seeking to decrease the number of homeless pets and the number of animals killed in shelters every year. It is an excellent resource for the many animal shelters and community programs it partners with throughout the country. Best Friends actively uses social media, especially Twitter, to boost awareness of its efforts.

Best Friends posts a variety of content on its social platforms ranging from adorable animal pictures to funny videos as well as informational material about how to help the organization.

Despite the range of content posted, some types were found to have higher total engagement (including total retweets, total @replies, and total mentions) than other types. 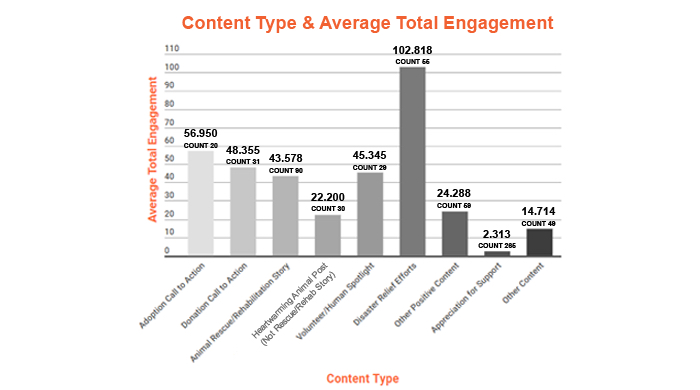 By analyzing content type to average total engagement, the most effective posts for Best Friends were found to be those related to what was categorized as “Disaster Relief Efforts” (averaging 102. 818 compared to 56.95 as the second highest average). When Hurricane Harvey hit Texas, Best Friends went to work to help rescue animals that had been left behind or lost in the storm. The organization shared these efforts on social media, requested donations and adoptions, as well as provided information as to how others could help the cause.

Many of you are asking how you can help with #HurricaneHarvey — thank you. Here is a list of shelters in need: https://t.co/lzwmgYTOIV. ^ND pic.twitter.com/29eqE51RXH

Throughout the time period studied (August 1, 2017 – February 19, 2018), the disaster relief effort content was responsible for the largest spikes (over 2.5K total engagements). These spikes were seen in late August to mid-September when Hurricane Harvey and Hurricane Irma hit Texas and Florida respectively, as well as in late September to early October when several reunions of animals and their owners post-hurricane were posted online.

Happy, curious and good-natured — that's Rascal! He flies home for FREE as our featured pet of the week: https://t.co/MWFHW2BwWz! ^ND pic.twitter.com/L5Q2qwZUaH

Donation Call to Actions are posts that, in some way, encourage people to donate to Best Friends’ efforts at reducing the number of homeless pets. Followers tend to engage with these tweets and want to share how people can help to their own followers.

#Shopforgood this #CyberMonday. Save lives, brighten spirits, and find something for everyone on your list! https://t.co/F9MEeuR0wi. ^ND pic.twitter.com/qG6WZEQPWm

Despite these being their most engaging types of content other than disaster relief efforts, Best Friends doesn’t post these as frequently as other types of content. We recommend that Best Friends focuses more on the Call to Action posts because, due to the evidence of higher engagement, people are more interested in seeing how they can help to further Best Friends’ mission. Best Friends has done a great job in engaging with the community and bringing their efforts to the forefront on social media through disaster relief efforts and call to actions.