The organization we chose to monitor was the Sierra Club, whose mission is; To explore, enjoy, and protect the wild places of the earth; To practice and promote the responsible use of the earth’s ecosystems and resources; To educate and enlist humanity to protect and restore the quality of the natural and human environment; and to use all lawful means to carry out these objectives. The organization is heavily focused on generating public awareness about current political movement and policies that affect the environment, as well as human and civil rights.

The use of media can be an extremely useful tool when attempting to garner engagement for the environmental causes Sierra Club supports and promotes. When analyzing the Sierra Club Twitter platform we aimed to understand if the presence of media was necessary, and if so, which types of media attracted the most engagement. When measuring engagement data to find actionable insights, we used the average total amount of engagement. This included the sum of retweet counts and reply counts from each tweet 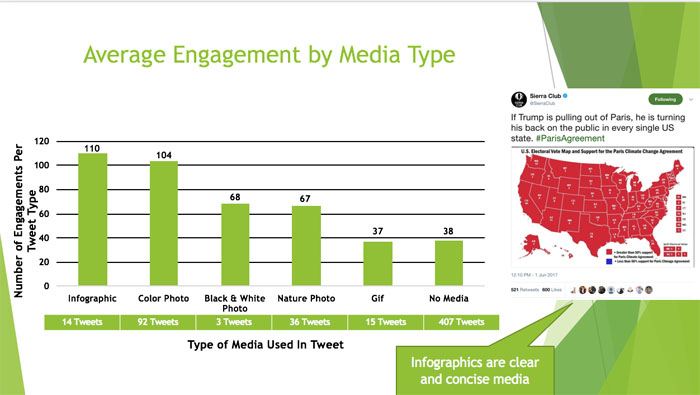 Two types of media stuck out during the analysis, colored photos featuring people and infographics. Colored photos featuring people, like in the tweet below, have the ability to capture emotions, feelings and events that generate a sense of community and connectedness among an online-audience, and infographics are a clear and concise media that bridge knowledge gaps with visually pleasing literature.

In order to increase the overall average engagement per post, we suggested that Sierra Club use media such as infographics or colored photos more frequently. These types of posts bridge knowledge gaps and build community among the Sierra Club audience. The above post is a great example of how the use of colored photos with people can build community around events that matter to them and trigger greater engagement when doing so!