Black Lives Matter is an ideological and political intervention in a world where black lives are systematically and intentionally targeted for demise. It is an affirmation of black folks’ humanity, their contributions to this society, and their resilience in the face of deadly oppression. 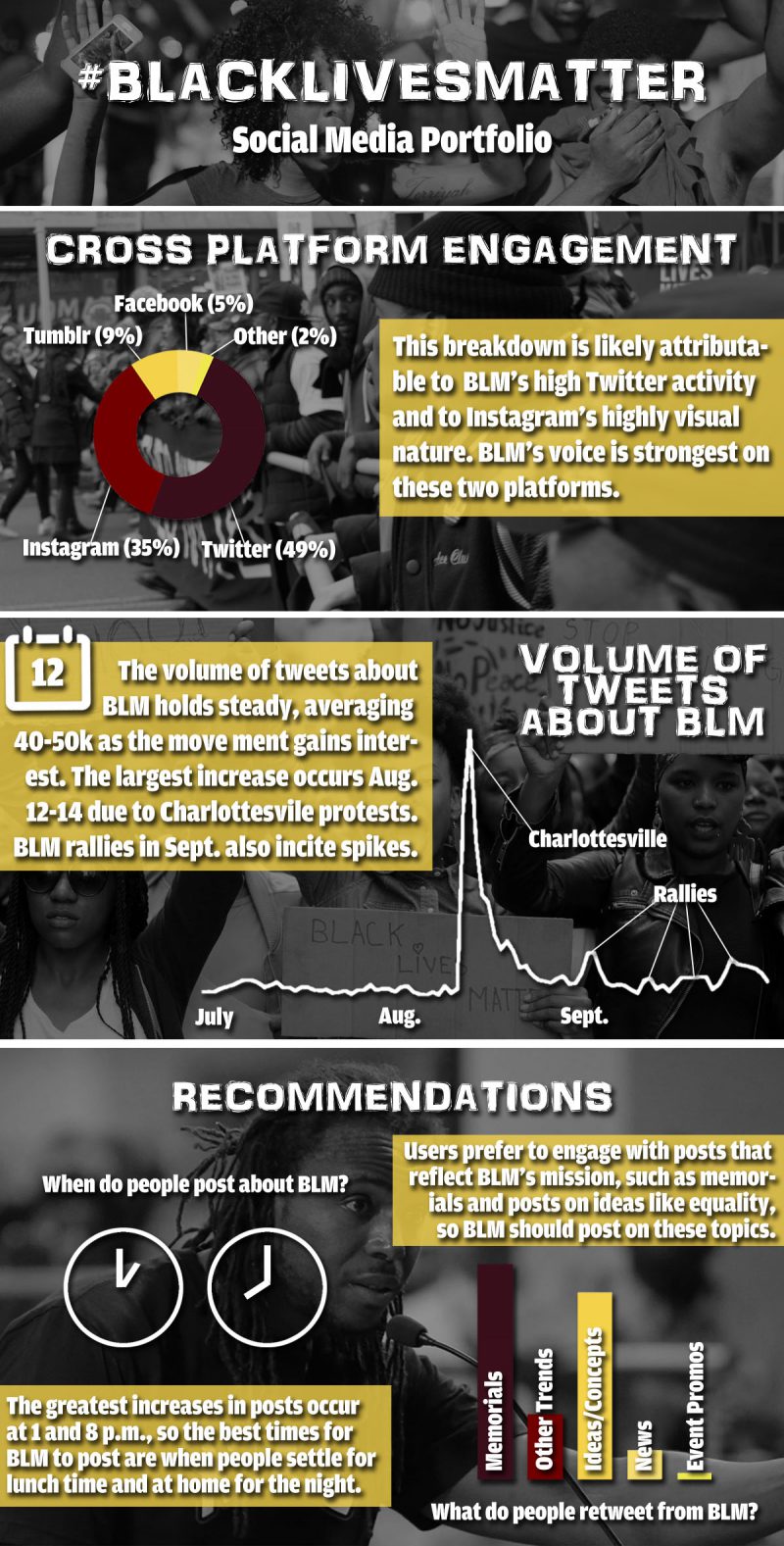 The top sources for posts about Black Lives Matter are Twitter at 49 percent and Instagram at 35 percent, likely because BLM’s activity is concentrated on Twitter and because Instagram offers a highly visual nature and the ability to write longer posts. The high post levels about BLM on Twitter and Instagram also suggest its voice is strongest on these platforms, promoting more engagement on the sites.

The volume of tweets about BLM is fairly steady, averaging about 40,000 to 50,000 posts per day. The consistency of posts about BLM indicates that the organization is consistent with its interesting and engaging posts. The largest increase in posts, to 553,226, occurs in August 2017 due to the events in Charlottesville from August 12 to 14. BLM joined this conversation with tweets of their own. There are also smaller increases—at 113,216 posts and 101,017 posts—around September 1 and September 24, respectively, as a result of BLM protests.

Examining, additionally, the times of day BLM posts, we find several spikes, the largest at 1 and 8 p.m. This demonstrates that the best times for BLM to tweet are around lunch time and when people are settling in for the night. Memorials of the lives lost to police brutality and posts that promote ideas such as social justice and equality garner the most retweets. Memorials earned 388 and ideological posts 224. This indicates that users prefer to engage with posts that most closely reflect BLM’s mission and purpose of affirming black lives and intervening in violence inflicted on black communities. A few of BLM’s most popular/engaging tweets are featured below.

You should not be surprised by what is happening in #Charlottesville. White supremacist violence is enacted every day against Black folks.

Two years ago today, #SandraBland was pulled over, thrown, arrested, and held for $500 bail before her death. #SayHerName pic.twitter.com/tyrUanxgla

How localized TEDx Talks influence conversation and Engagement on Twitter

How localized TEDx Talks influence conversation and Engagement on Twitter