It comes as no surprise that activity on Twitter spiked during the airing of the 89th Academy Awards, as users take to Twitter to provide play-by-play commentary. The conversation surrounding the topic of the “Best Picture” category, rightfully peaked from the hours of 12 a.m. and 1 a.m. early Feb. 27. The highly anticipated winner of this award is the final category, typically unveiled at the end of the show. With the show running over past midnight on Sunday, Feb. 26, the aggregate volume of posts about Best Picture topped off at 719,889 posts and then quickly descended as viewers turned in for the night. 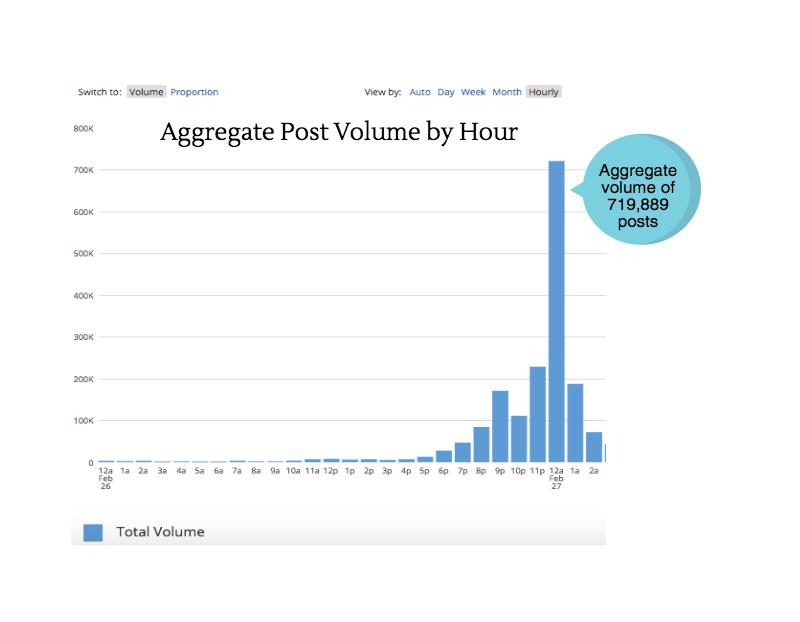 The award for best picture was announced just after midnight on Monday, Feb. 27, in which the award was wrongfully given to La La Land and was corrected on stage, as the error revealed that Moonlight had won Best Picture. The massive increase in Twitter conversation is in response to not only the public error, but also the celebration of the winner, Moonlight.

From Sunday, Feb. 26 to Monday, Feb. 27, conversations about Moonlight dominated the Twitter landscape surrounding Best Picture, with over 41,000 mentions (@moonlightmov) and over 310,000 uses of the movie hashtag (#Moonlight). La La Land falls in second for most talked about, as expected. The movie (@LaLaLand) was mentioned in over 23,000 posts and the hashtag (#LaLaLand) was used in over 260,000 posts.

Although La La Land was wrongfully awarded the Oscar, responses to the soon after Moonlight win were largely positive. General sentiment of all posts were 33 percent positive and eight percent negative. Additionally, out of the 25 percent of tweets that held identifiable emotion, 74 percent of tweets contained language of joy. Any upset La La Land fans in the conversation were drowned out by the large, overjoyed Moonlight advocates.