A marriage of muscle and will seems to be working in Susan G. Komen’s favor, as they fight against the formidable foe: breast cancer. Spearheaded by poster child John Cena, the World Wrestling Entertainment Inc. (WWE) appears to be a prolific and influential voice on Twitter for Susan G. Komen (SGK), both as it pertains to bringing awareness about the organization and its mission, which was started with the aim of preventing and curing breast cancer and saving lives by raising and providing funds for research, medical care, advocacy, community and provider education, and psycho-social support in the US and worldwide.

In 2012, led by wrestling superstar sensation, John Cena, who wanted a way to reach, serve and impact his immense and loyal female following, WWE joined in the fight with SGK to “tap-out” breast cancer by bringing awareness to their community and selling merchandise to help SGK fund breast cancer research. Well, this tag-team approach seems to be strategically working in SGK’s favor, as the data demonstrates that WWE is indeed a prolific and influential voice in conversations about the organization, on Twitter. 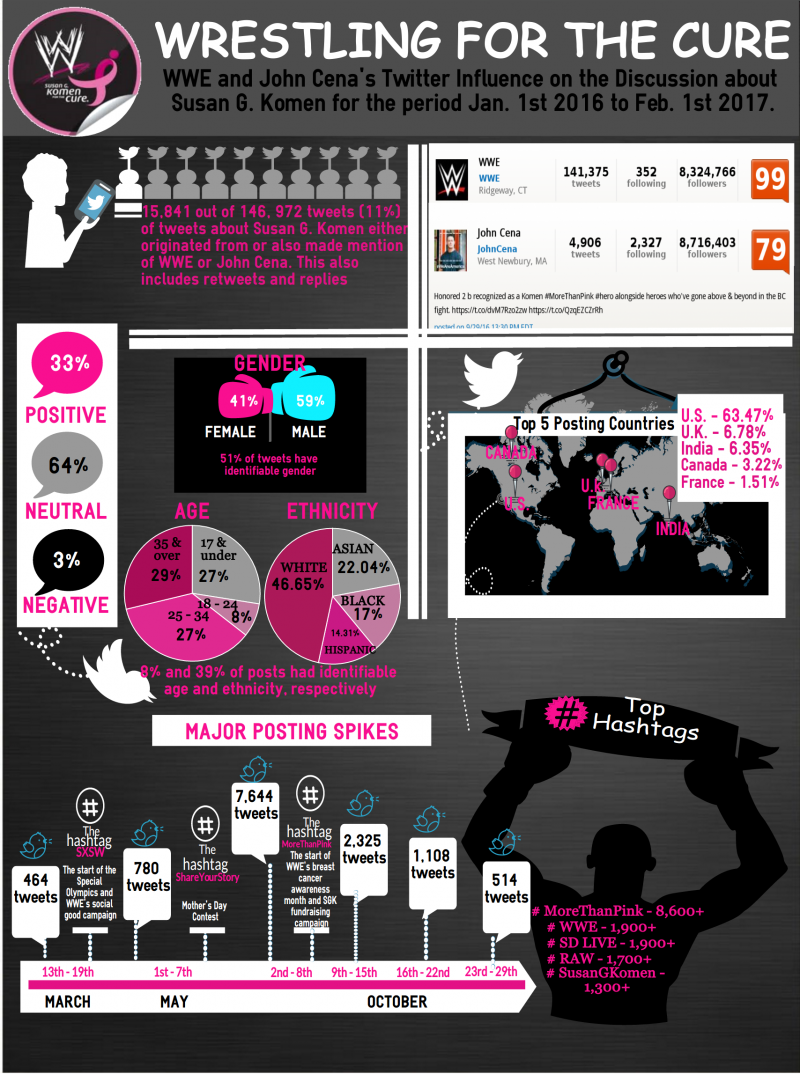 In analysis conducted on Crimson Hexagon for the period January 1st, 2016 to February 1st, 2017, the data reveals that WWE and John Cena are responsible for at least 11% of the conversation about Susan G. Komen. 15, 841 conversations about the organization were from original tweets from WWE or mentions made in retweets and replies to WWE, about the organization. What’s more profound is that these conversations reach SGK’s target demographic by engaging both males and females who are part of the conversation almost equally, 59% to 41% respectively. The sentiments of these tweets are also a strong indicator of the positive discourse generated for and about SGK. An overwhelming thirty-three percent (33%) of the conversation is basically positive, with only three percent (3%) coded as negative. It is also noteworthy that a great portion of these negative posts are essentially about individuals sharing their disgust, anger or sadness for the breast cancer disease itself.

Moreover, major spikes in the volume of posts relating to both WWE and SGK occurred in March during WWE’s Special Olympics Social Good Campaign (#SXSW); May during the Mother’s Day #ShareYourStory campaign; and in October during Breast Cancer Awareness month, which accounted for nearly half of the total tweet mentions citing WWE and SGK and the use of the hashtag “MoreThanPink” that dominated that period. Additionally, the tweets just from the first week of the Breast Cancer Awareness campaign in October 2017 had total potential impressions of over 60 million.

Furthermore, due to the magnitude and loyalty of WWE and John Cena’s Twitter following of 8 million plus, respectively, their tweets have the ability to exponentially reach millions more individuals with their messages about SGK (tweets that can potentially be seen by other followers of these millions of followers as messages are engaged with through retweets, likes and replies), as opposed to the mere 123, 000 followers of SGK. For instance, one tweet by John Cena about Susan G. Komen was retweeted over 1,000 times and liked over 6,000 times.

I’m proud to be recognized as 1 of @SusanGKomen’s 35 #MoreThanPInk influencers, who r working hard to end this disease forever. pic.twitter.com/bw2cWOzwsV

It is also noteworthy that the actual number of SGK related WWE conversations are considerably higher if other wrestling entities and figure heads are included in the search. Overall, due to high engagement with WWE mentioned SGK conversations, (likes, retweets, replies), WWE and John Cena can be definitely considered major influencers for SGK as they bring awareness about the organization and as they both fight to “Smack Down” breast-cancer..