Georgia Elections – A contentious night for a fight not yet over

The Georgia Elections came to a close Tuesday night as Kemp lead the polls with Abrams extremely close behind. We took to social media and analyzed some of the conversations that were coming from this historic election. We looked at the data on November 6th, election day, to determine what people were saying about these candidates. Overall, there was over 567,000 total posts on Twitter about the Georgia election.

We looked at several pieces of data, but the first we looked at was who was mentioned the most on Twitter to get a better sense of the conversation. The results yielded that Stacey Abrams (@staceyabrams) had the most tweets in this election with over 120,000+ tweets and Brian Kemp (@BrianKempGA) close behind with over 96,000+ tweets. We then look at some of the top hashtags that were used in this election and found some interesting insights:

Some of these top hashtags had to do with Abrams and the Georgia elections as a whole, but #ElectionDay was the most tweeted hashtag with over 55,000+ posts. The conversations within these top hashtags dealt with an considerable amount of tweets about Abrams but we also found that another topic of conversation was wait time at the polls with some users complaining the waits were above an hour and a half.

Greg Martin, 70, is a native of Atlanta. He says the hour and half he waited to vote is the longest he’s ever waited. “I voted for Stacey Abrams because Brian Kemp is an asshole…and misogynistic piece of shit.” #ElectionDay @guardian pic.twitter.com/g4faT8zWOe 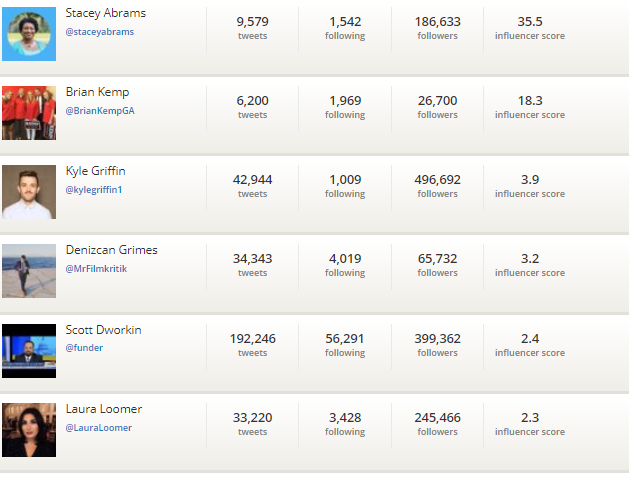 As we look at influential persons in this governor’s race conversation it is no surprise that we can see both candidates as top contributors to the conversation. Directly following the candidates MSNBC producer Kyle Griffin, Muslim and Black Lives Matter activist Denizcan Grimes, and Co-Founder of the Democratic Coalition Scott Dworkin showing their support for Abrams through advocating her progressive policies, encouraging Georgians to vote, and noting Abrams historic political activism. In opposition to Abrams we also can see investigative journalist Laura Loomer expressing her support for Kemp as well as bringing to light facts on both candidates political backgrounds.

Looking more in depth at the candidates, we wanted to focus on sentiment behind the posts to get a better idea of how these candidates were perceived by voters on election day.

Brian Kemp had more negative tweets than Stacey Abrams with Kemp at 38% and Abrams at 10%, but Stacey Abrams had more positive tweets with Abrams at 25% and Kemp at 19%. From this insight, we wanted to then dive deeper into the conversation to get an in depth view of what users were saying about each candidate. 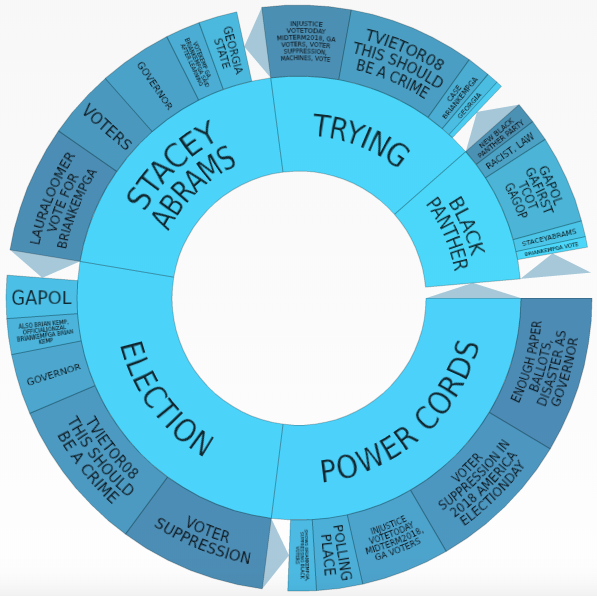 •This injustice is what happens when a man overseas his own election
•This is voter suppression in 2018 America#ElectionDaypic.twitter.com/0zahF0R29P

In #GA the @staceyabrams campaign is under investigation! @BrianKempGA said “After learning of a failed attempt to hack the state's online voter registration and My Voter Page, my office contacted the DHS & opened an investigation.”Thugs brandishing guns 2!#VoteKemp GA! pic.twitter.com/h4c6Z3AhDe 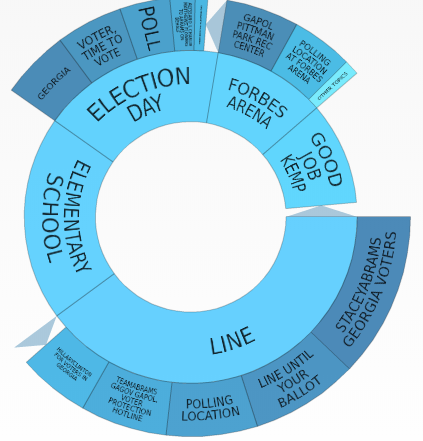 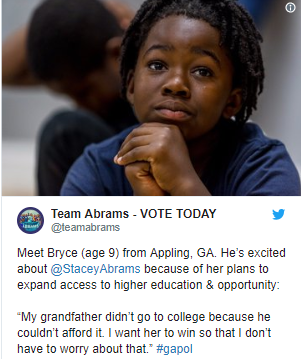 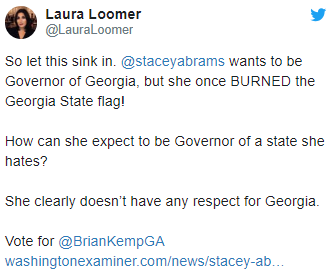 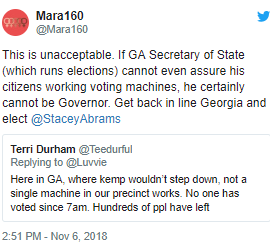 Lastly, we looked at sentiment hourly for the election, noting spikes throughout the conversation. From 1 to 2pm we saw a spike in both positive and negative sentiment of over 10,000 combined posts across Twitter. The positive conversation during this period of time surrounded the excitement of voting and those posting about who they would vote for. Stacey Abrams was mentioned the most in the conversation and with Twitter users touting her win would make history. In contrast, the negative tweets during this timeframe focused on many users experiencing issues with their voting machines and voter wait times upwards of 1.5 hours. In addition to this conversation, Brian Kemp was also a focus in the negative conversation. Tweets called Kemp corrupt or incompetent due to the issues that voters were experiencing as well as negative sentiment toward the voter suppression accusation against Kemp.

We also noticed a large spike in negative conversation from 5 to 6 pm that garnered 18,000 posts from users across Twitter. This conversation centered around the frustration with preparation to the election with lack of proper equipment at voter polling stations and long wait times at voter polls, as well as conversation among users about voter suppression tactics. Additionally we see one last substantial negative sentiment spike at 9pm with many Abrams supporters suggesting a lawsuit to be filed against Kemp and frustration with suspected voter suppression. Many Kemp supporters deny the allegations of foul play and asserting that Abrams supporters were “sore losers”. 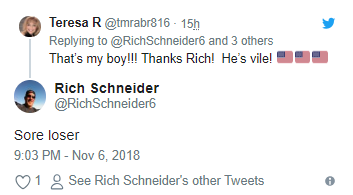 The election came to a close that night with some very interesting results from social media. Twitter gave us some very valuable insight into how candidates were performing during the voting period and allowed for in depth conversation analysis of the current political landscape of Georgia politics. With record setting early voter turnout the data we collected shed light on the shifting opinions of the historically Republican state, and how users on social media from each party are becoming more politically active.