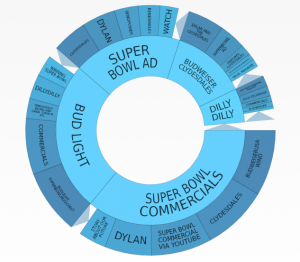 The big games kick off in just under 24 hours (as of the time of this posting) yet the two biggest players in the beer commercial battle, Anheuser Busch brands Budweiser and Bud Light, are laying rather low.

Budweiser released their commercial entitled “Wind Never Felt Better” on January 23, but there haven’t been any clues on Bud Light’s commercial except that the ads’ purpose is to promote the new transparent ingredients label and their two spots were dreamed up by Wieden & Kennedy, the agency behind the “Dilly Dilly” campaign. Bud Light has been consistently releasing content for the past two months. Recent Bud Light video advertisements have taken place in the same kingdom where “Dilly Dilly” toasts have been made, but recent spots have lack that triumphant saying.

The total Twitter conversation surrounding the two brands is at a humble 8,048 posts, with 74% of those posts made for Budweiser, and 26% for Bud Light. Much of the conversation, besides the January 23rd release date of Budweiser’s commercial, features users reminiscing about the brands’ past commercials. The two brands have nearly the same sentiment reactions with 17% positive and 4% negative for Budweiser and 18% positive and 5% negative for Bud Light.

While Budweiser’s commercial sparked mostly neutral or positive conversation with their emotionally-charged approach; this year featuring their classic Clydesdale horses, a dalmatian, wind power, and a Bob Dylan song; Twitter’s reaction was not as impactful. Despite reaching more than 15 million views, Budweiser has only generated four times the conversation with their Super Bowl ad than Bud Light, who has yet to release their Super Bowl advertisement. While Bud Light has generated some buzz as the sponsor of the “Super Bowl Music Festival,” and through their promise to give the winning team’s city free beer, they’ve shown that this year when it comes to beer, it may be worth waiting to wait until the big game for the reveal.