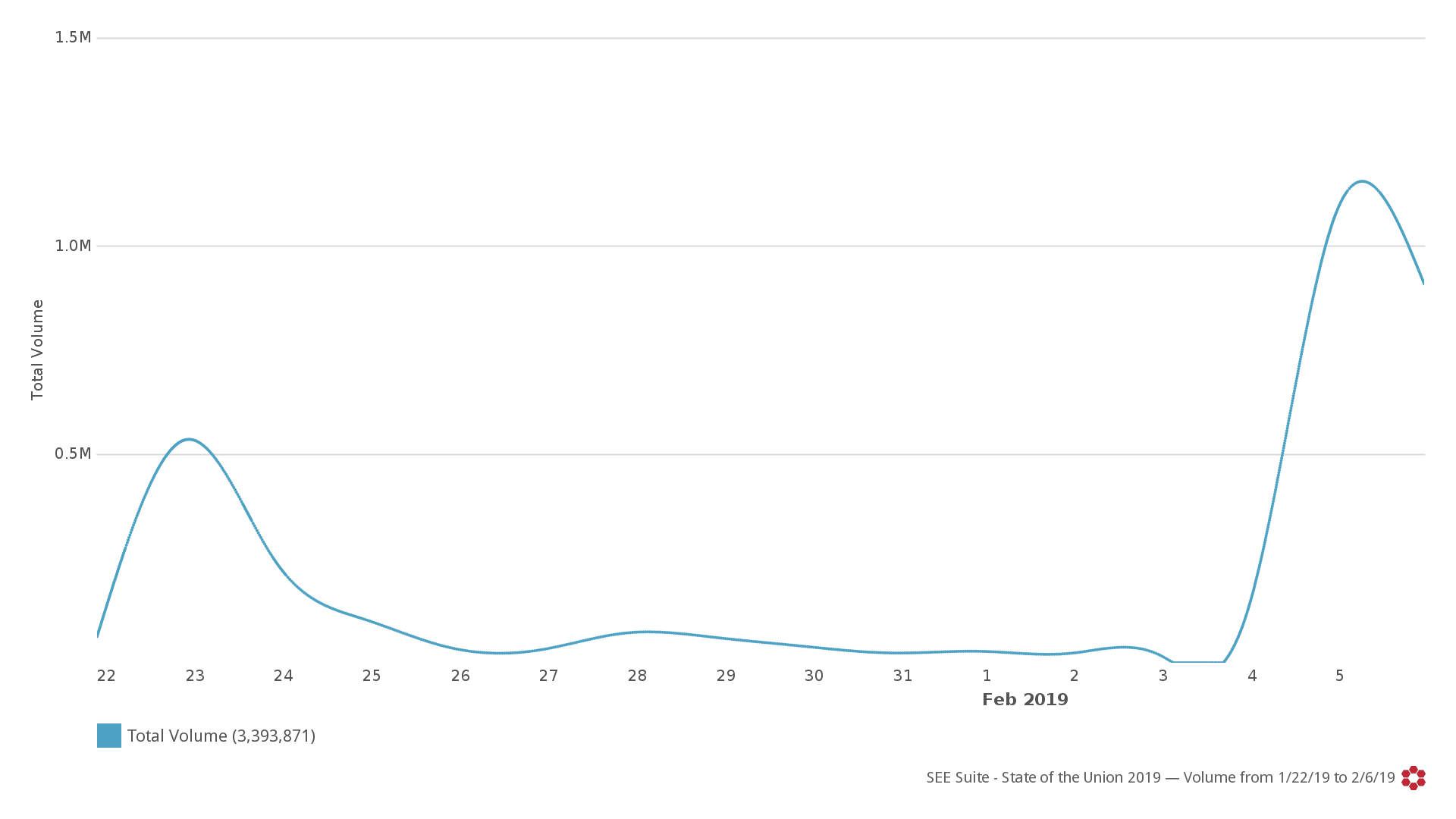 As the standoff between House Speaker Nancy Pelosi and President Donald Trump came to an end, a new date was set, and conversation of whether the State of the Union would actually happen ceased, the buzz surrounding the event fell as quickly as it started. In the few days leading up to the event, it looked like the event had been put on the backburner for all. However, on February 5th, the day of the event, conversation steadily rose throughout the day and spiked at 9pm when the President Trump began his address.

Though the events of the 23rd overshadowed all other conversations in the few weeks leading up to the State of the Union, during the actual event, the conversation surpassed the previous date by double with 535,491 and 1,077,538 tweets respectively. 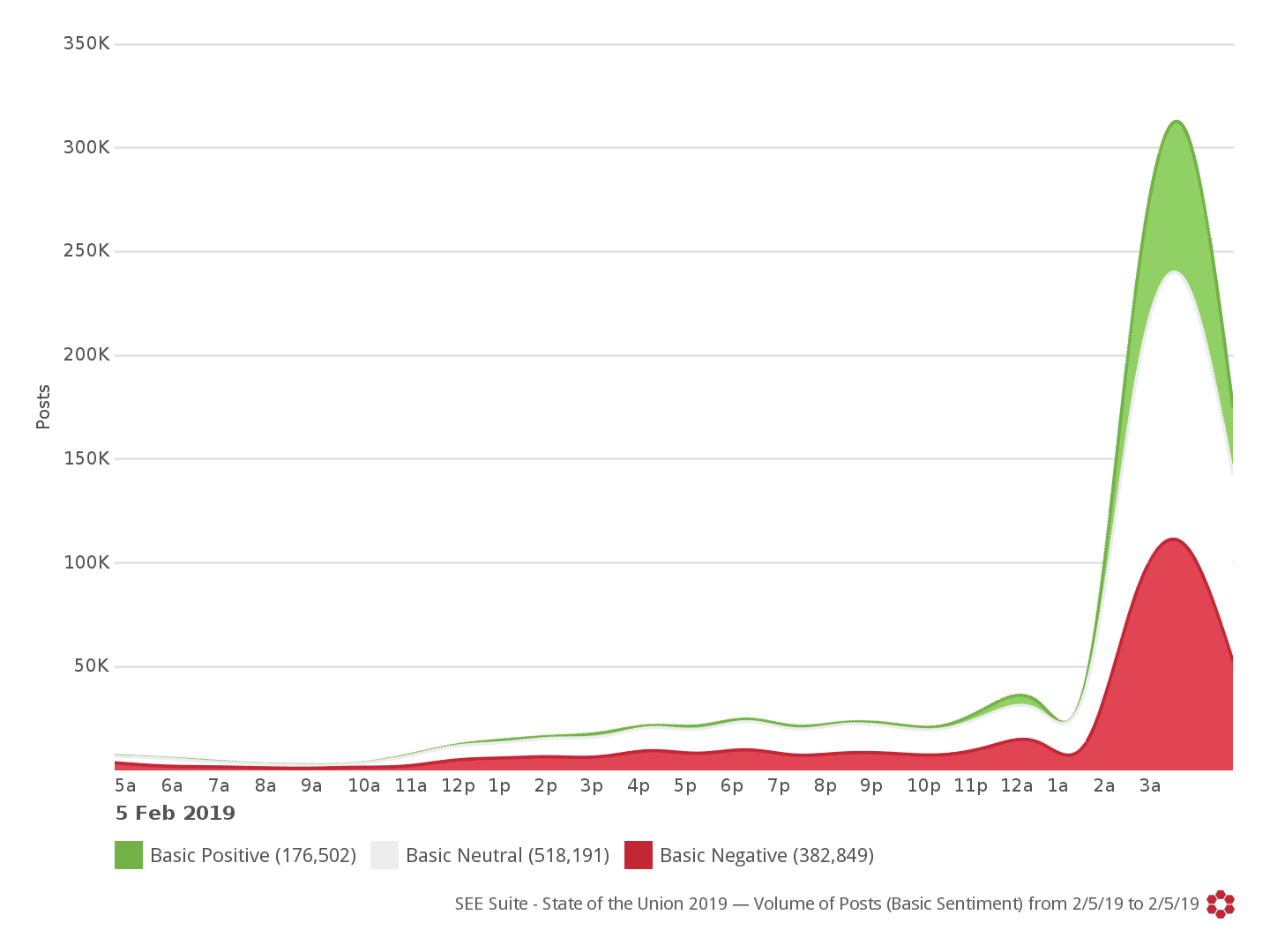 Many viewers and listeners of the State of the Union took to Twitter, live streaming coverage of the event. Quick to reply with reactionary messages, fact checking, and of course, memes, people of all ages and parties had something to say. Several post State of the Union commentaries claim that 76% of viewers approve of what they heard. However, on Twitter, the overall sentiment throughout the night was largely negative or neutral. 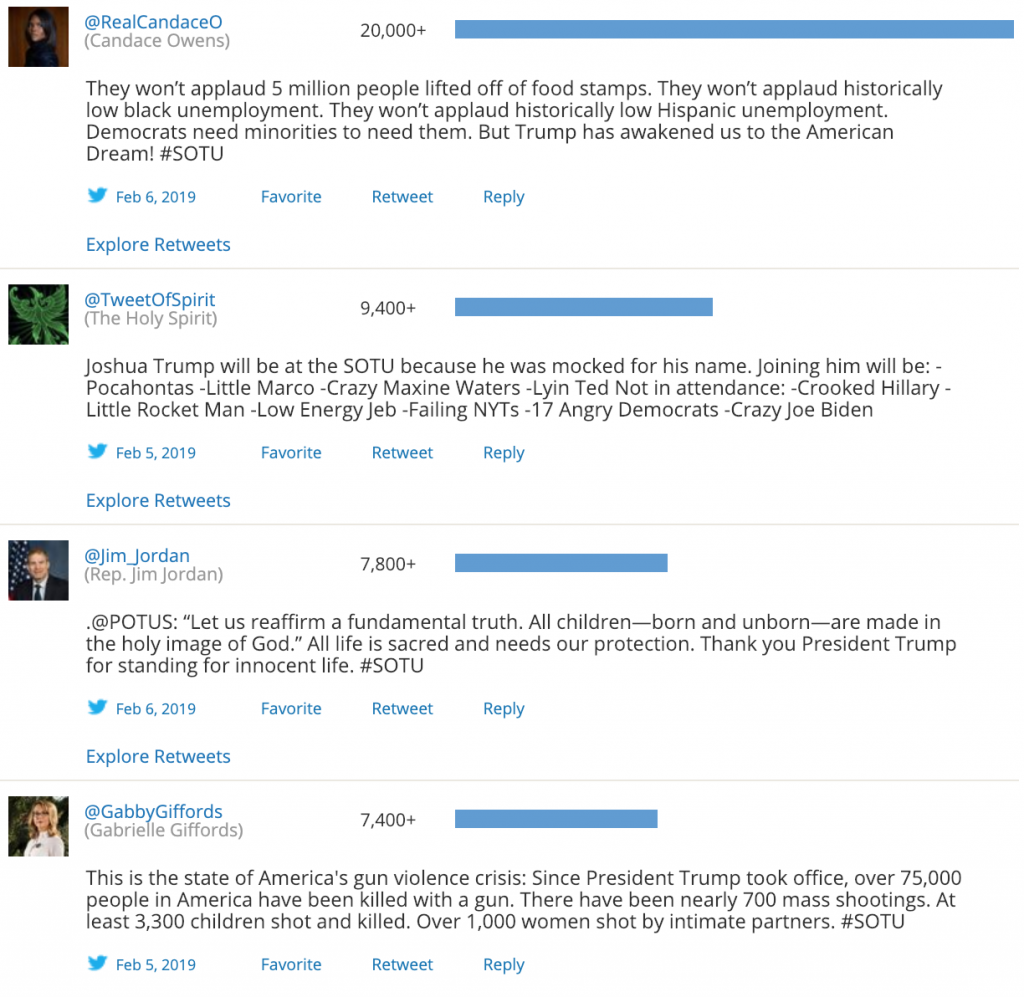 Much like the president’s address, a large portion of the conversation was over border protection. However, many of those reactions were criticizing the president’s stance on the matter.  Apart from the wall, other big topics of conversation were over Joshua Trump, the 6th grader in attendance who was bullied for having the same last name even though there is no relation, the lack of clapping coming from the Democratic side of the room, reactions to the president’s stance on abortion, and fact checking particularly on the topic of gun violence.

Stacey Abrams achieved in a matter of minutes something Donald Trump failed to do in over an hour — to embrace and give voice to the spirit and core values that make America great.

The conversation didn’t stop once the president finished addressing the nation. Many stayed tuned to listen to the Democrats response to the president’s speech. Even before the event began, many were excited to hear Democratic up and comer, Stacey Abrams deliver her response to the President’s State of the Union address. Since the moment it was announced that Abrams was chosen, there has been a wave of support around her from her party. Known as an eloquent speaker, the hopes for Abrams’ speech were high. She was expected to have a harsh rebuttal of the president’s address. Although there was criticism for her response being too partisan, many, including former Vice President Joe Biden, thought she did well refuting the president’s stance on topics such as immigration, gun violence, and voting rights.

46.79 million people watched the State of the Union which was a 3% increase from the previous years. The briefly forgotten about event ended up taking both Twitter and the nation by storm.