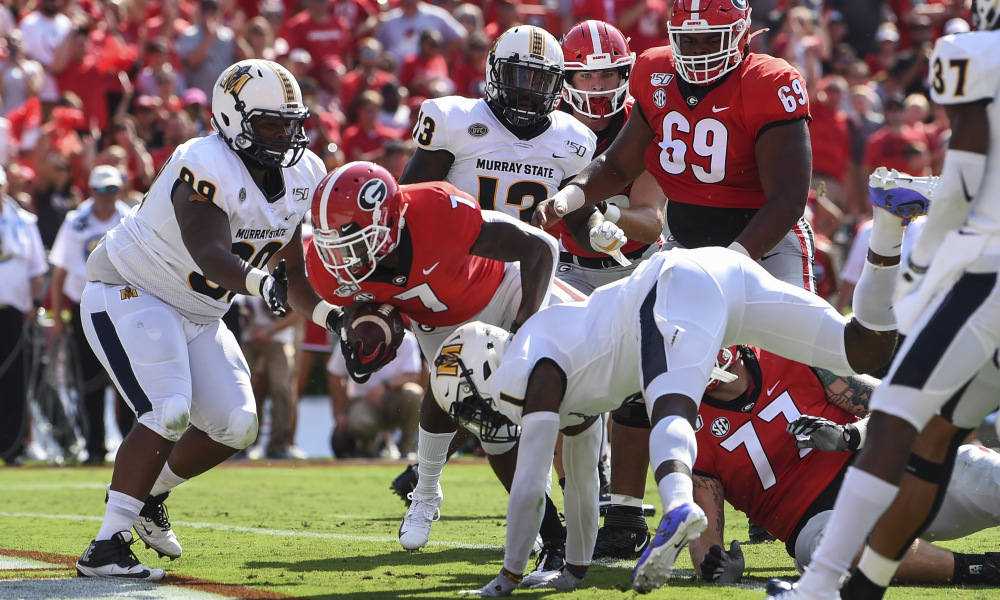 The Georgia Bulldogs sent the Murray State Racers home following a dominant victory of 63-17. The Bulldog’s record now advances to 2-0 as they begin to prepare for their next home game versus the Arkansas State Red Wolves. On top of the Bulldogs’ landslide victory, Georgia’s home stadium has been given a new name. Formerly known as Sanford Stadium, the stadium will now be acknowledged as Dooley Field at Sanford Stadium in honor of former Georgia head coach and athletic director Vince Dooley. Before the game began, Vince Dooley and his family as well as 25 team captains from his former Georgia teams were welcomed onto the field for the unveiling of the new Dooley Field.

The media buzz following the Murray State game was mostly positive with a total of 752 posts being recorded from Twitter and Instagram one day after Saturday’s football game. 32% of the analyzed content came from Twitter and 68% came from Instagram. Of the 32% of content recorded from Twitter, #Georgia, #UGA, and #GoDawgs generated the most engagement with an average retweet count of 77. This is likely due to the fact that these three hashtags directly correlate to Georgia football and provide a sense of unity and pride for the Bulldog Nation population.

Most of the topics documented post UGA vs. Murray State were highlights and stories covering the blowout win against the Racers. Other trending topics in discussion included Georgia linebacker Nolan Smith and his impact on UGA’s win, Bulldog Illustrated photos, Dawgnation fanbase, and UGA’s future going forward in the football season. Stay tuned for next week as our #3 Bulldogs take on the Arkansas State Red Wolves. Go Dawgs!