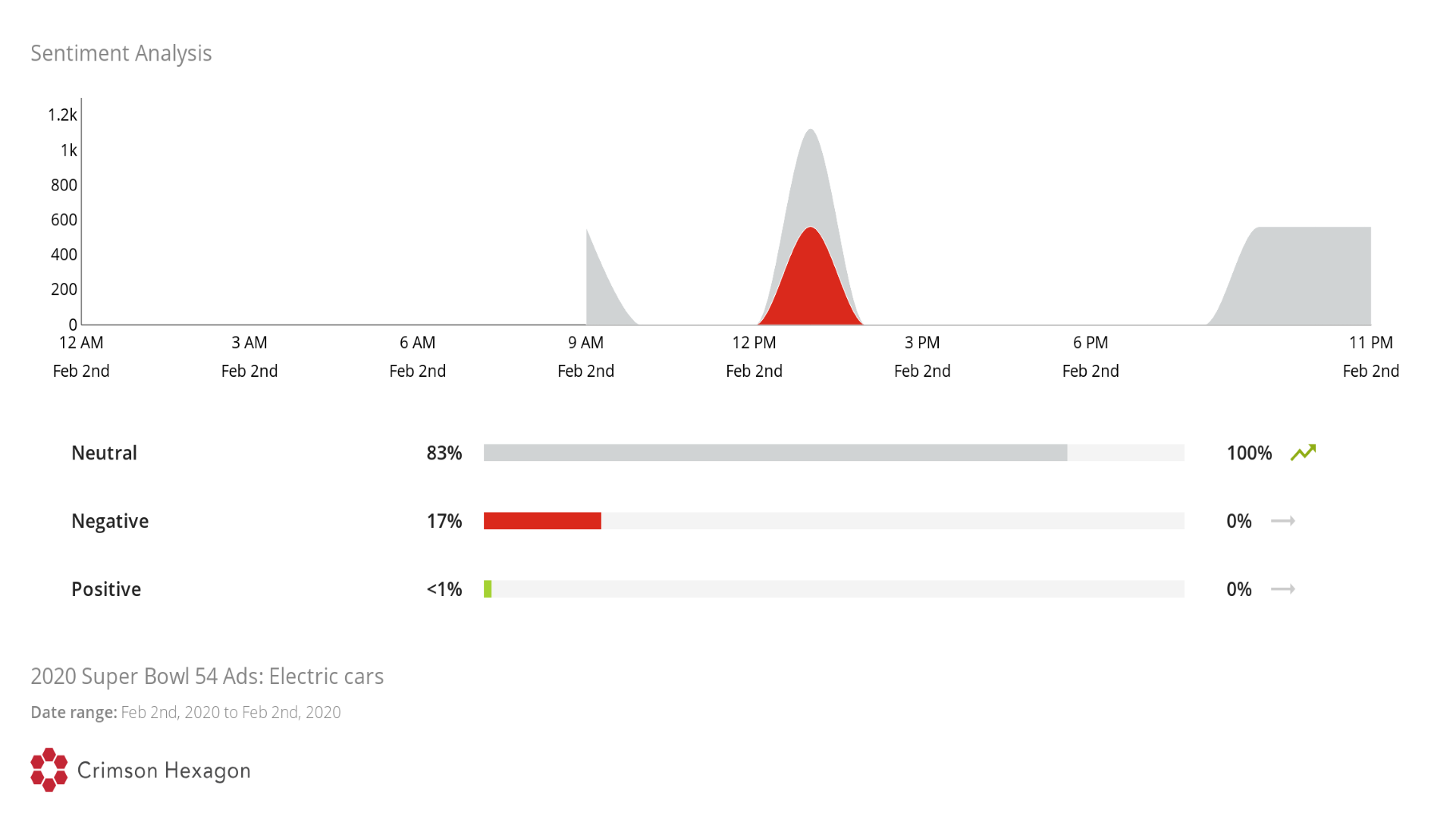 The Super Bowl is the largest sporting event on the planet with an average of 102 million people tuning in to watch the Kansas City Chiefs take on the san Francisco 49ers.  However, football wasn’t the only battle taking place as car advertisers fought for the audience’s affection with cleverly developed commercials. A record number three out of eight car advertisers were advocating for a novel take on the automotive industry by showing off their electric powered vehicles. Names like Audi and Porsche are a premium in the automotive industry, but a surprise name like GMC’s hummer also had a commercial featuring an electric vehicle. So exactly how did the new electric sensations stack up against the tried and true gas-powered vehicles? Were these intuitive designs enough to change the social media sphere? Like all great pop culture arguments, Twitter has the answer.

A total volume of 15,199 posts involving eight car advertisers with 3,377 (22%) of the posts involving the electric car advertisers and 11,822 (78%) of the posts involving the gasoline powered car advertisers. The outlook is looking a little bleak for electric car enthusiasts as their post share should be closer to 38%. Not only that, but the overall sentiment involving electric cars was 17% negative with 83% of it being neutral. Gas cars were more enthused with the showing with 43% of their posts being positive and only 57% neutral. Overall, gas-powered car commercials came off funnier and more genuine compared to their electric counterparts. Jeep’s Groundhog Day commercial featuring Bill Murray wins over the hearts of its audience by generating 5,629 posts (37%) despite climate change becoming a serious discussion point.

One company did not make an appearance at the Super Bowl but still managed to make their presence felt was the electric car maker Tesla. With a staggering $5.6 billion dollars saved; it is the commercial-less Tesla Motors who are still able to generate awareness at high level events. Not only did Tesla not feature an ad in the Super Bowl, if they were lumped in with the other car advertisers who were paying for a spot (18,013 posts), they commanded a post share of 2,814 (16%) alone. Social media hype has expanded beyond the big game through alternative social networks, pre-event videos, and classic person to person interaction. Electric cars aren’t quite ready to dethrone gas powered ones just yet, but they are well on their way.