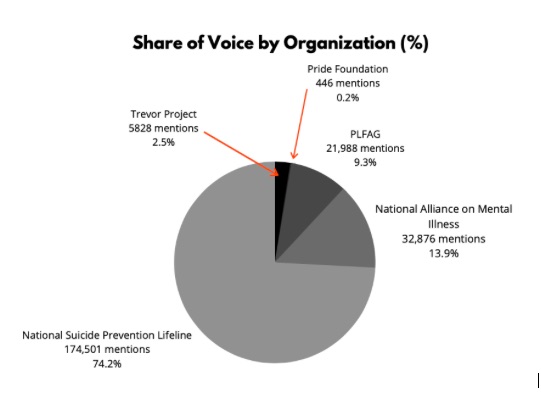 In order to properly disseminate their resources to those in need, we recommend The Trevor Project partner with larger companies in order to increase reach because their reach is limited to LGBTQ+ community, whereas other organizations do not have a preliminarily limited audience. For other LGBTQ+ organizations like PLFAG, there is a notable increase in engagement with posts (mentions and retweets) because they partnered with large companies to facilitate certain campaigns that aligned with their overall brand values. With this PFLAG example, we see that even though they are still technically “niche” with an emphasis on the LGBTQ community, they were able to hold their conversation in conjunction with a larger brand in order to expand the reach (i.e. total impressions) of their message. From the data analyzed, we see that some of the most engaged with posts among The Trevor Projects competitors are posts in which the lifeline organization has partnered with another brand that is outsized of their typically social media community.

The social media partnerships act symbiotically for the lifeline organizations and the outside brands, as one is able to increase the reach of their message and resources to those in need and the other is able to further position themselves as a social advocate, hopefully to an accomplish an end goal of increasing their consumer base. Ultimately, these partnerships increase the amount of people engaging in the lifeline organizations online conversations, which is vital in helping create a larger social media community to support LGBTQ+ youth who are struggling.